Since being taken with the No. 1 overall pick in the 2009 NFL draft, quarterback Matthew Stafford has been one of the most recognizable Detroit Lions.

Yet this offseason, there have been rumors the Lions might try to move on from their all-time leader in almost every significant passing category.

Most of those notions were unsubstantiated, and general manager Bob Quinn made clear a report they were shopping Stafford was “100 percent false.” But for the past two seasons, there have been questions about Stafford’s long-term future in Detroit.

Which is fair, considering he has had back injuries over those two campaigns. But it’s also not pragmatic, considering some of the mandates in place from the franchise’s ownership and a contract that would mean the Lions would spend more money to have him not be in Detroit this season than if he were on the team.

But to explain further why the Lions aren’t moving on from Stafford this year — and under what circumstances they might in the future — we’re here to help.

The Lions have won little with Stafford, so why keep him?

Yes, it’s true the Lions have yet to win a playoff game or a division title with Stafford, but that isn’t entirely the quarterback’s fault. While some of his seasons have been subpar, his offense has had a truly strong running game only once — in 2013, when Reggie Bush rushed for 1,006 yards.

Stafford also hasn’t been helped by questionable defenses in some of his better campaigns, including last season when he was playing at a Pro Bowl level before his back injury but was still 3-4-1 in his starts. Most of the issue came with a struggling defense, which has been another concern throughout large parts of Stafford’s career — except for 2014, when Stafford and the Lions had their best shot to be a real playoff contender but lost in the wild-card round to the Dallas Cowboys.

So many times throughout his career it has been proved that Stafford isn’t the problem. Combine that with how teams struggle to find quarterbacks in the league and getting rid of a proven signal-caller without a clear backup or succession plan makes little to no sense.

What about Stafford’s contract? That makes it harder to move him, right? What about after 2020?

Stafford’s contract would cost more for the Lions to trade him — $24.8 million — than for him to remain with the club in 2020. And it’s hard to see Detroit swallowing that massive cap charge for any player, let alone getting rid of one of their most productive players along with that amount. It’s one of the largest reasons a 2020 trade is a nonstarter on so many levels.

After 2020, though, moves are more plausible. He carries a $33 million cap hit in 2021, including $20 million in cash. His dead money of $16 million is more manageable for the club, and the cap savings of $17 million would make some sense as well. Of course, it’s not clear if a new collective bargaining agreement would scuttle things here.

Even so, it’s hard to see the Lions moving on from Stafford in 2021 unless one of a few things happen:

–He once again goes through an injury-plagued season.

–If the Lions play so poorly that Quinn and head coach Matt Patricia are fired, leaving a new general manager/head coach combo to make a decision on Stafford. And in that scenario, they might opt for the complete rebuild, which could result in Stafford finding a new home by trade or release.

Why did the Stafford rumors start?

It’s a combination of the injuries, Detroit’s top-five draft pick and Alabama quarterback Tua Tagovailoa’s potential availability at the No. 3 spot. It was fueled further by an Instagram post by Stafford’s wife, Kelly, saying that if Detroit didn’t want them anymore then they could go somewhere else — using Instagram Stories to highlight an article discussing landing spots for her husband. That night, local television station WDIV reported the Lions had been in trade talks about the quarterback for a couple of weeks. Hours later, Quinn said this was false. But away it went.

But does it make any sense for Quinn to trade Stafford?

No. Lions owner Martha Ford and her daughter, Sheila Ford Hamp, made it clear they expect the Lions to contend for the playoffs in 2020. While it’s a nebulous statement that could have many meanings, it also is something much, much harder to achieve without Stafford than with him. So Quinn would have to be taking a pretty big risk on his own career — and that of his head coach — to make this sort of move.

Quinn has shown no problems in the past moving on from players he felt were underperforming or not quite right for what the Lions were trying to accomplish, including tight Eric Ebron and safety Quandre Diggs. Stafford, as a productive player, team leader and someone Patricia enjoys coaching, fits neither of those categories. So, no, it would not make sense for Detroit to trade him in 2020. At all.

OK, so Stafford is staying. What happens behind him? 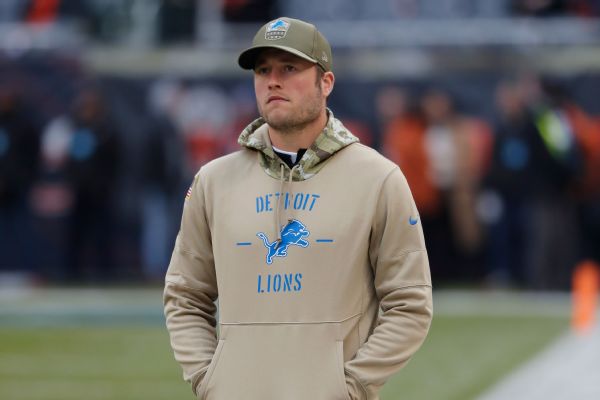 • Why Lions QB Stafford is staying put
• Belichick creates buzz at Middle Tennessee
• Should Raiders be leery of WRs in Rd. 1?
• Cardinals not shy about WR draft plans
• Who is the other Lamar Jackson?

This is where it gets more interesting. After Stafford’s back injury prevented him from playing in eight games last season, it was more clear the Lions needed to address their backup QB situation. The Lions have shuttled a dozen quarterbacks in behind Stafford at some point and it didn’t work — and Jeff Driskel and David Blough saw playing time after the injury last season. Driskel is a free agent. Blough is on the roster and remains worth developing, but maybe not as the No. 2.

Would the Lions pay for a high-priced — or medium-priced — backup? Case Keenum, Blake Bortles and Chase Daniel could be intriguing options. So too would Marcus Mariota, but Detroit might have to pay a bit more for him — and he might find options with easier paths to a starting gig.

Then there’s the draft. There’s going to be the Tagovailoa question from now until the draft, unless a team moves up to No. 2 to take him. While there’s a case to take Tagovailoa — the Kansas City Chiefs example with Alex Smith and Patrick Mahomes is the main comparison — the Lions have too many other needs to ignore, especially on defense. The better chance for a quarterback with real developmental upside could come at the end of Round 1, if Detroit wanted to trade back into that round for either Jake Fromm, Jacob Eason or Jordan Love — or even further to perhaps the start of Round 2 with any of those prospects. There are other quarterbacks Detroit could target later, but they would need development, including Washington State’s Anthony Gordon, Oklahoma’s Jalen Hurts or Arizona’s Khalil Tate. If one of those quarterbacks are taken, pairing him with a veteran to handle the No. 2 duties initially would make sense.

Handicapping the fortunes of Seahawks’ top…