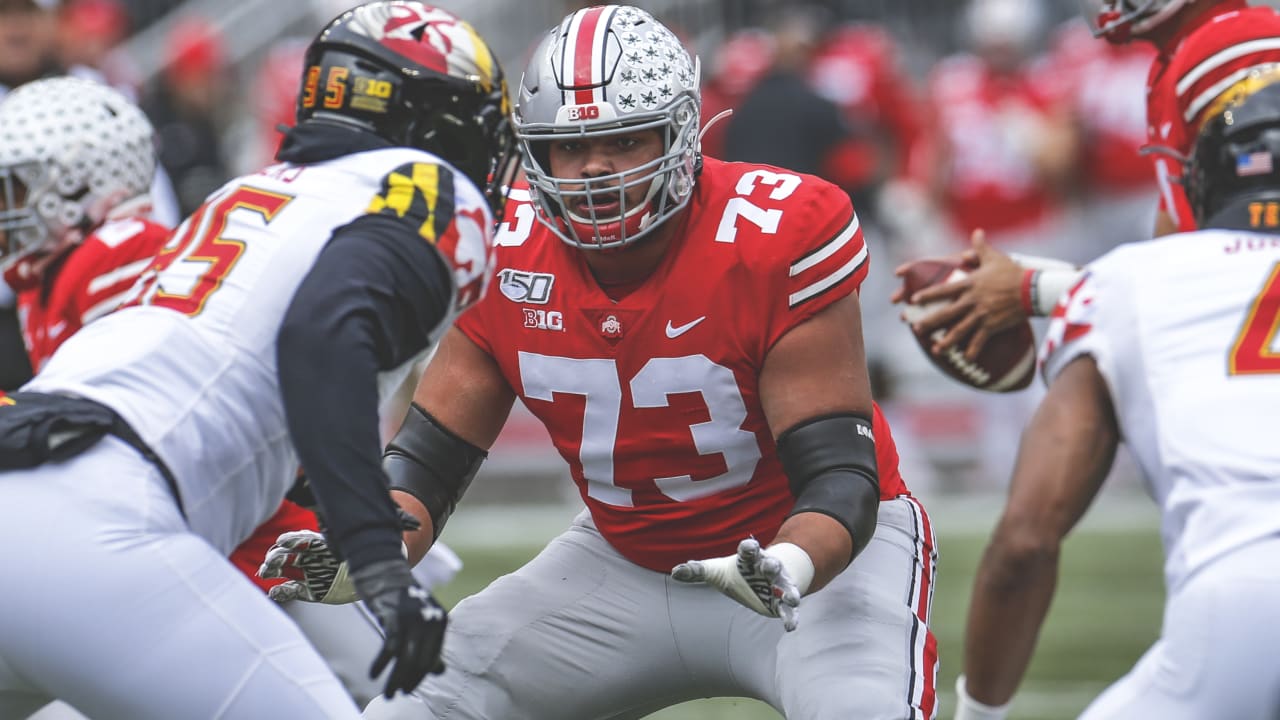 INDIANAPOLIS — “You’re going head-to-head every play, so you’ve got to be nasty. You’ve got to have a little something off in you. It’s definitely vital to being an interior offensive lineman.”

Those were the words of former Ohio State interior offensive lineman Jonah Jackson last month at the 2020 NFL Scouting Combine when asked how important it is for an offensive linemen to play physically and “nasty.”

Having that extra edge to your game, or having something “a little off in you,” as Jackson put it, could be considered a sign of advanced abilities in an offensive lineman.

Not only have you grasped the nuances of the game that make offensive line play possible, but you’ve taken it to an extracurricular level where you’re trying to punish the man across from you.

Jackson spent his five-year college career in the Big Ten conference, where offensive line play is among the best — and nastiest — in the country.

He first signed on with Rutgers, where he redshirted as a true freshman in 2015 before seeing the field sparingly on the field goal protection unit and occasionally filling in at right guard in 2016. Jackson got more traction in 2017, starting in five of the six games in which he appeared, including three at center and two at right guard. He was then a full-time starter for Rutgers in 2018, starting all 11 games at right guard and earning Honorable Mention All-Big Ten.

Jackson then transferred to Ohio State as a graduate student in 2019 and earned the starting left guard spot, where he started all 14 games. He would go on to be named Second-Team All-Big Ten and a Third-Team All-American.

“Yeah, everybody’s talked about just being versatile, being able to play center, being able to play guard. That adds a plus to your draft so definitely told them I was able to play both positions and I’m ready to go wherever they need me,” Jackson said about his meetings this offseason with NFL teams. “I’m comfortable in all of them. During my offseason training I’ve been working all three positions. I can go wherever right away and start.”

The fact that Jackson has so much experience in two different systems could very well make him more prepared for the jump to the NFL.

“I’ve been through five offensive coordinators so I can learn different things,” Jackson said. “We’ve been pro style, spread, we’ve been through it all. It shouldn’t be too much of a transition beside now we’re getting paid to do the thing you love.”

On the field, the 6-3, 306-pounder plays football like it is the game he truly loves, as he mentioned.

Often when defenders approach him with a little steam, their momentum dies and they get absorbed into his frame.

Jackson’s nastiness is obvious, as he displays his strength as a people-mover and is always looking to pancake defenders or drive them into the ground.

Find out the latest moves the Indianapolis Colts…